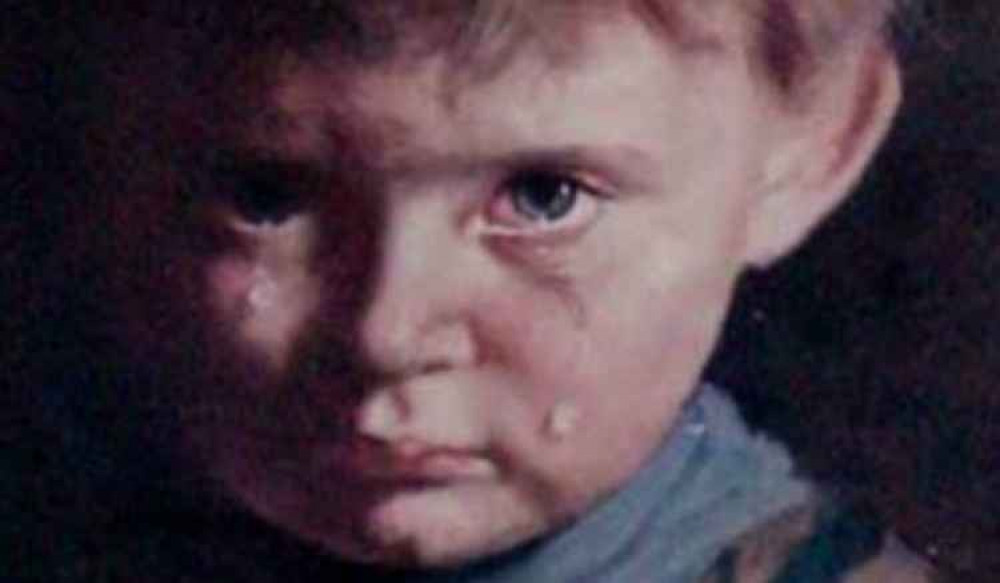 Forgive us, we have run this story before, but it's a decent one for the season of unquiet souls...

On September 4 1985 The Sun newspaper - no stranger to being cavalier with facts - reported that the Rotherham home of Ron and May Hall had been severely damaged by fire.

Almost as shocking for the Halls as the blaze was the fact that a painting hanging on their wall had been left miraculously intact.

It was a print popular in the north of England called The Crying Boy. The Sun decided that the fire had been caused by its 'Blazing Curse'.

Immediately readers contacted The Sun with their stories of misfortune inflicted by the tearful urchin.

The next day's edition included news of a house in Surrey that had burnt down six months after the boy was brought into it. All the paintings inside had gone up in smoke, apart from The Crying Boy. 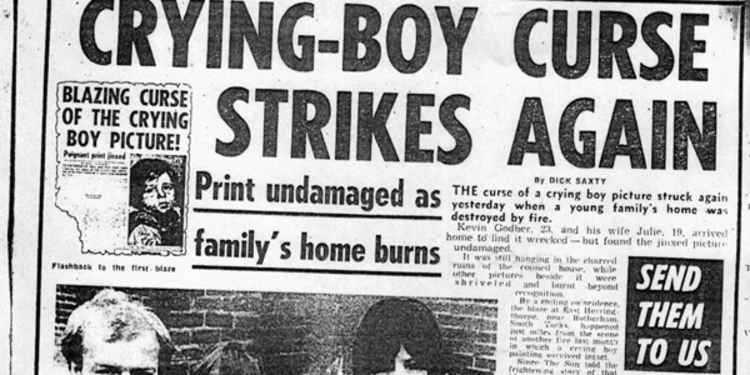 A Kilburn woman, her sister-in-law and a friend had all bought the picture and endured fires soon after. They had even seen one of the prints swing from side to side of its own accord while hanging on the wall.

A mother described how her 11 year old son had 'hurt his private parts' while handling the picture, and even members of the firefighting community recounted how they had attended incidents to find The Crying Boy unharmed in the midst of charred and blackened mayhem.

Notorious Sun Editor Kelvin MacKenzie saw an opportunity to spin these stories. Psychics announced that the malign spirit of a wronged child was caught in the prints and wreaking its revenge, and panic set in when the paper calculated that as many as 50,000 of them had been sold to innocent art lovers.

Diabolical arson and misfortune continued. On October 24 readers learned that the home of Kevin and Julie Godber had been wrecked by fire but not their Crying Boy. "By a chilling coincidence," wrote the reporter, the blaze occurred a few miles from the Rotherham fire that had sparked the whole story just a few weeks before. 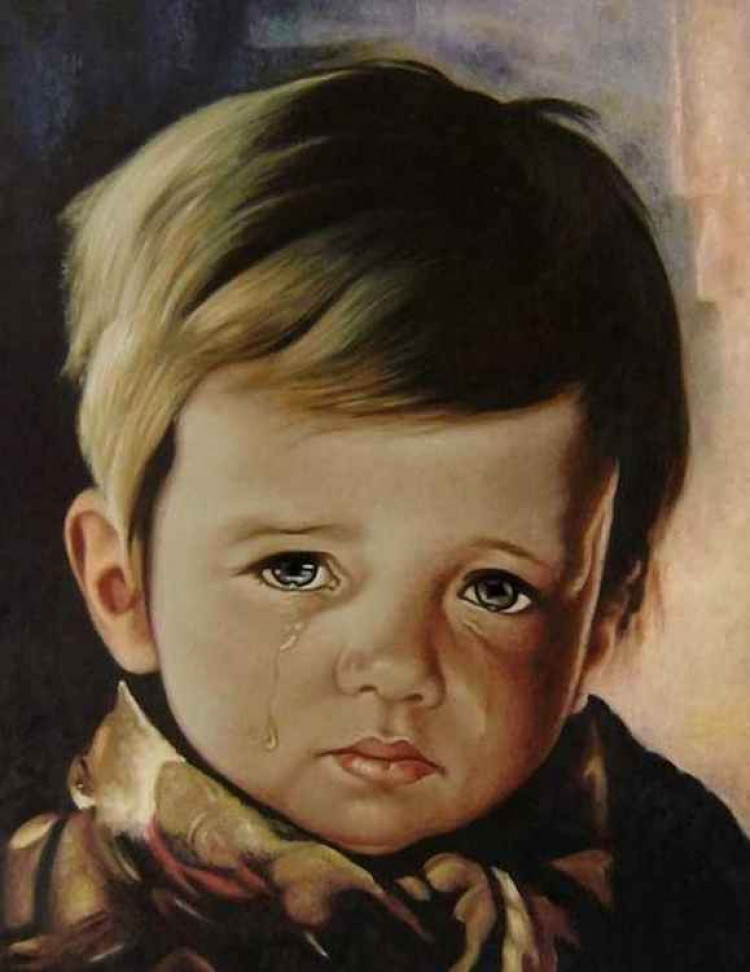 As if one cursed Crying Boy wasn't enough, there were several of them. Here's another.

A couple of days later The Sun turned its attention to Heswall where 'an explosion' had struck the home of the Amos family. Two copies of The Crying Boy, both barely damaged, were retrieved from the living room and dining room but did not remain intact for long. It was reported that Mr Amos destroyed them.

A theory had been put forward by firefighters that the prints were made onto a particularly durable hardboard that did not easily combust, but this sensible explanation of events did not suit the agenda of The Sun or the appetite of readers for supernatural mystery.

The paper volunteered to arrange a mass burning of the pictures and, despite having paid for them with hard earned cash, readers sent loads of them to form a large bonfire that was, inevitably, ignited by 'red hot Page Three beauty, sexy Sandra Jane Moore'.

The paper timed the event carefully. Sandra did the deed on October 30 1985 so The Sun could report the ending of the curse the next day. 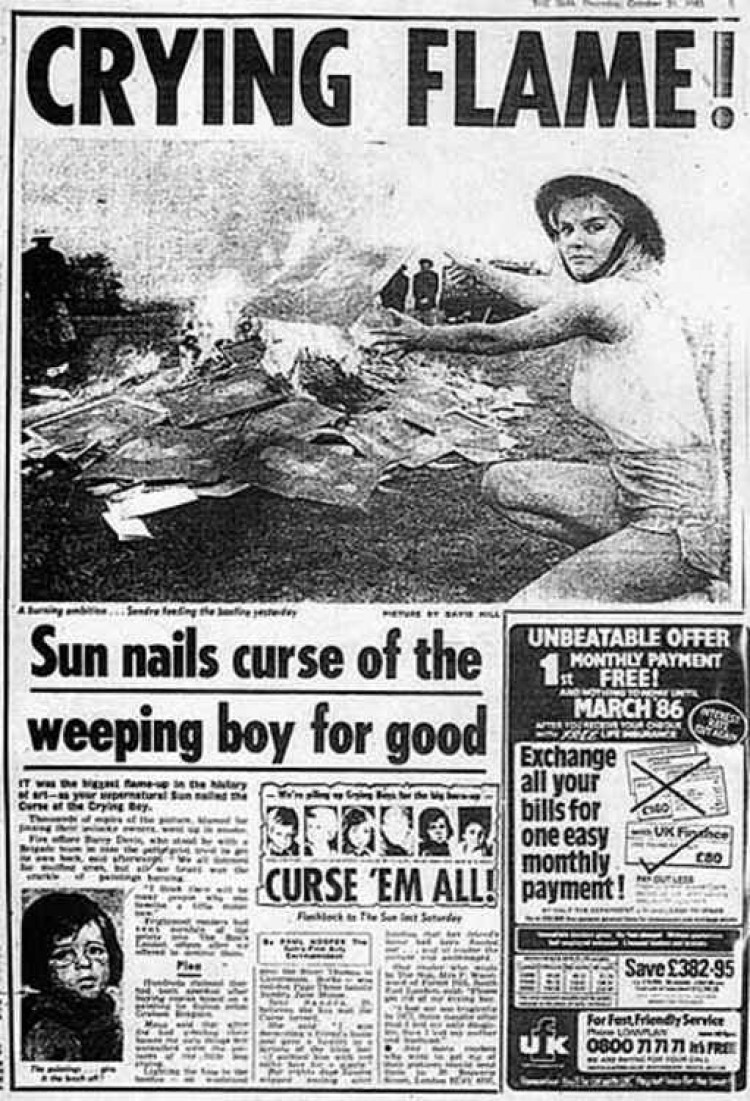 The curse is consigned to the flames

Heswall: Every picture tells a story 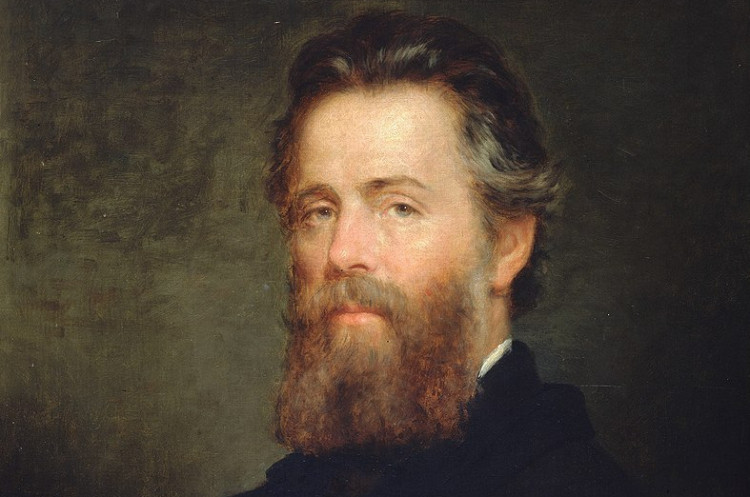 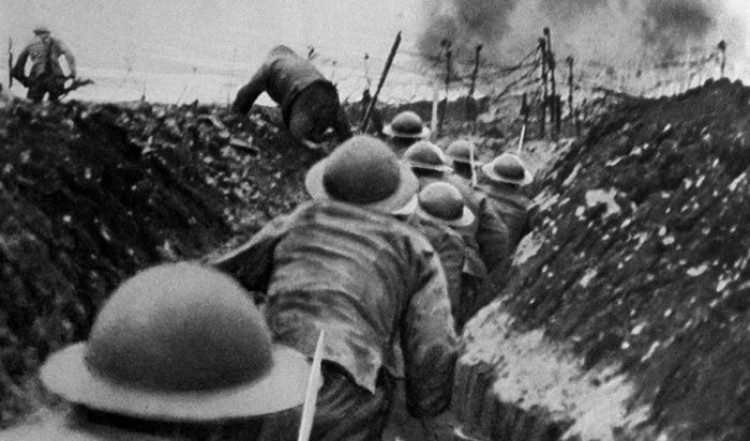